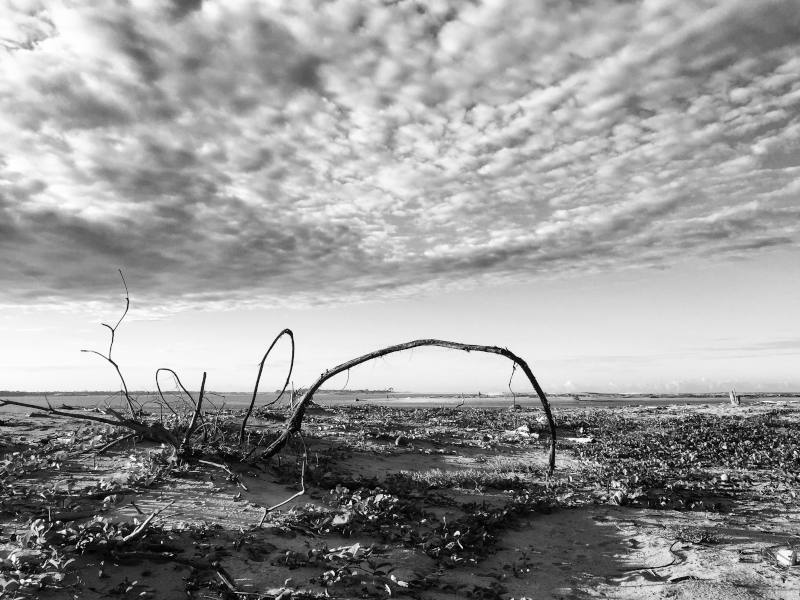 Free composition made with original sounds recorded by the Rio Doce region after Samarco’s dam broke dumping toxic waste along 879 km of water. Unprecedented destruction to the ecosystem and riverside populations whose sources of subsistence were fishing and environmental activities. Landscapes and cultural elements such as Bandas de Congo are voices echoing in this sound-specific program – an imaginary of poetic and political operations. Alda Ribeiro (fisherwoman, fisherwomen’s daughter, and granddaughter) and Guimaldo Firmino (deep-sea fisherman and a Congo master) are the main voices in this audio-film.

Stretching a fishing net is about opening a river in many margins. Its transparent and sufficiently strong rings – from one end to the other – tie up words, sounds, intimate perceptions and heterogenous voices in intangible acts of time and space. Those voices of pain and dreams, of hollowness and meetings, of willingness and indifference. Made for water, the net is an element that reaches and provides nurturing for the body. Opened in full air, it is a gesture of creation of other possible foods. The imagination is outside all toxic capturing and silencing. The imagination positions itself as a poetic act and political practice.

To the people, earth and waters of Rio Doce.
Their gestures of strength, beauty and fight.

Ana Emerich investigates dialogues among sound, place and conceptual perspectives. Her works articulate topologies of listening, field recording, image, memory, and political imagination. She is interested in poetics of displacement – rhythms and deviations between the visible and the non-evident – and, also, in artistic practices with temporal immersion. She conducted orchestras and choirs. Since 2015 she has taken part in artistic residencies and developed commissioned artworks which are presented in expositive, editorial and performative contexts. Bachelor’s in Music/Conducting (UNICAMP), Master and currently a doctoral researcher in Contemporary Art and Culture (UERJ).