*Topia is the extension of the exchange initiated in 2020 in Dystopie Berlin-Brasilien festival among artists residing in Brazil and expatriate artists residing abroad. Their common point is the listening experience as a (de-)construction and (re)signification tool.

Given the trivialization of terms associated with and derived from “utopia” and “dystopia” in recent decades, which would be their places of existence? Would they be errant? Unraveled and relativized in all their categorizations, from science fiction to critical theory, from science to decoloniality, how do utopias and dystopias arise? This festival intends to amplify this discussion.

The asterisk, borrowing the concept of gender neutralization in the German language, stands for everything that remains to be uttered, that rebels against its non-existence in the current use of languages. As we walk towards uncertain futures, how can the asterisk, the “x” and other language adaptation resources be used for more inclusive, open-ended expressions?

With the perception of sound phenomena as a starting point, the artworks represent and express a wide range of backgrounds, socializations, experiences and languages. * TOPIA is a women’s and queer-led festival with an experimental format curated collectively and decentralized by the participating artists themselves. In addition, it results from a cooperation between diverse institutions, such as brazilian research centres (UniRio, USP, UFRB), artistic collectives and cooperatives (Errant Sound, Sonora and +Um coletivo de arte), cultural institutions (Goethe Institut) and grants that support the production of cultural events and mediations (Neustart Kultur, Berliner Senat für Kultur und Europa).

The coordinators of the festival, Laura Mello and Vanessa De Michelis (Berlin and London), contribute with their experience in transnational cultural policies and international financing. The first partnership between Berlin and Brazil in 2020 has already benefited from the policies of European artistic funds from public sources, where the idea of providing financial support to immigrant artists from the south portion of the globe is considered urgent. After all, artworks and speeches already move with some ease between both hemispheres, but the resources are still concentrated on the northern part. 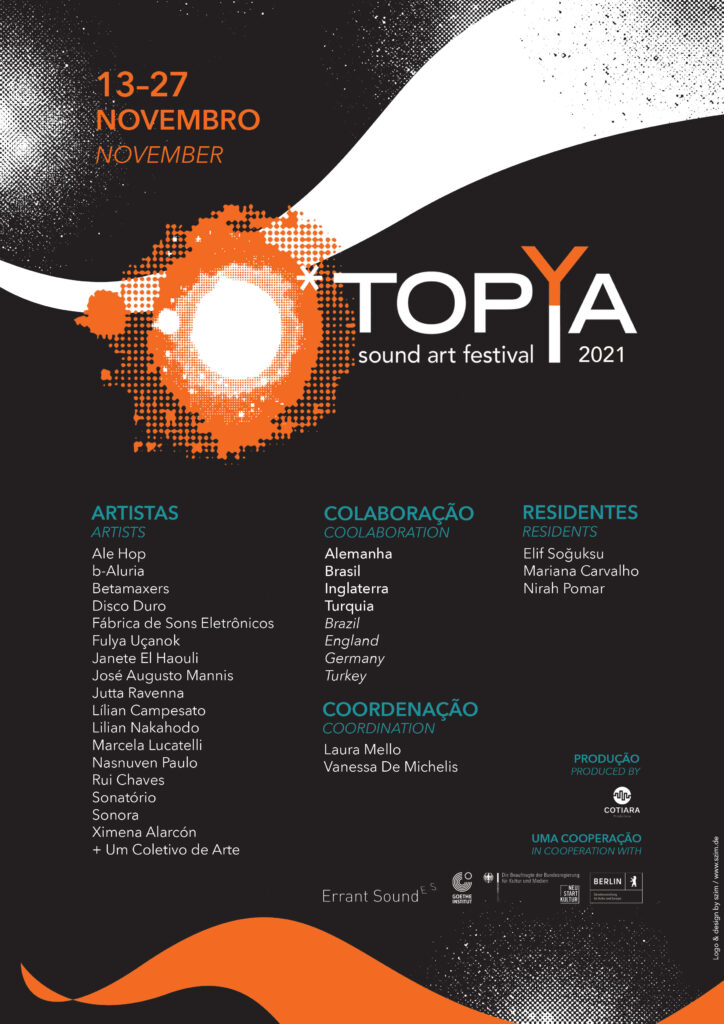