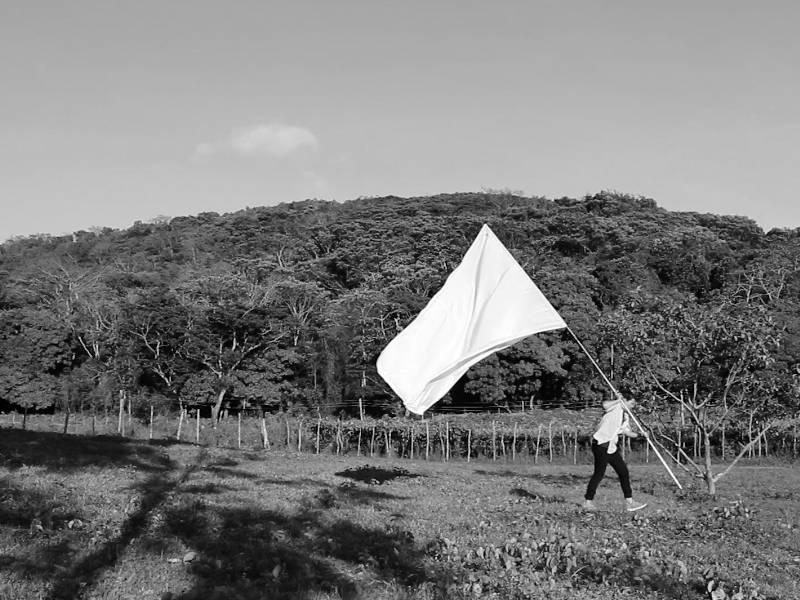 Koro is a video and sound work proposed by Waléria for which she collaborated with the Yogyakarta-based artist Lashita Situmorang and Samsara non-profit organization.
In an effort to cross everyone’s territory and to reflect collectively in the world, the work collects voices, speeches, feelings about the affective, amorous and sexual experiences of anonymous people, transformed by the artist into a polyphony of voices, an amplification to be released publicly. The main image as the body of the artist carrying a flag, walking throughout the duration of the stories, is an act of listening that tries to reach the healing process itself, a way of reducing borders — between beings of the same species extended fo believing about borders between countries. The work wishes to break the silence in order to heal and transform traumas into harmony, the act of letting it out, to heal inside out. Can the body be an object of transmission? How to put together a space of voices and propagate them like an antenna from afar?

Waleria Americo holds a MA in Multimedia Arts — Performance & Installation from University of Lisbon, a BA in Visual Arts from Grande Fortaleza Fine Arts Faculty, and a specialization degree in Audiovisual and Electronic Media from Federal University of Ceará. As a visual artist she works in-between video, photography, installation and performance, experimenting and investigating the embodied relations with one’s surroundings, and the transitions between livelihood and displacement. Her artwork unfolded in a non-linear trajectory, in which an attention to the reciprocities between body and site was translated into a series of site-specific performances and performances-to-image, materialized in objects and installations, or in photography and video. In an additional layer, the attention to the Other — in terms of the collaborative and shared dimension implied in any artwork — lead her to a propositive approach, in which the materiality of conversation and conviviality is explored through the construction of landscape images that offer themselves as an invite to inhabiting. Recently, a special inferest in researching the potentialities of displacement as a tool for producing suspension and remaining, is pulling her to explore the intercessions between sound, orality and performativity.