‘The rooms alone are worth coming to. A total of 14 positions are presented in the Alte Münze. Most of them are completely new productions – an important feature of this producers’ festival initiated by Georg Klein.
In the basement of the former mint, you are first greeted by very low tones. Stefanie Egedy has set up a huge subwoofer box from which sub-bass frequencies between 35 and 63 hertz come out. The low frequencies are only marginally picked up by the eardrum. Instead, the whole body vibrates, indeed the air seems filled with pulsating matter. It is a physical experience that Egedy classifies as “better than sex”, and indeed the vibrations get the body and mind quite moving.’

‘The sound art festival took place in the last days before the second Lockdown began in Germany, in order to – as the organisers Laura Mello and Georg Klein say in their concept note – “showcase artistically framed perspectives that allow the utopian to shine in the dystopian”. The creative use of technology showed up as a common thread throughout the exhibition, as in Giuliano Obici’s Screen Utopia – a room where all the screens were in block colours, and could also be seen and heard on your own mobile phone by connecting to the local wifi network. It felt like a futuristic nightmare.
Vivian Caccuri and Gustavo von Ha’s portrayal of the Brazilian Sertanejo was a fascinating and mesmerisingly absurd interpretation of this phenomenon. Other highlights included Christian Diaz Orejarena’s Fronteras Visibles, a music video addressing cultural appropriation to the soundtrack of Champeta (music originating from the Colombian Caribbean coast), and Ute Wassermann’s Aus Atem, a direct commentary on the danger of singing during the pandemic, which she countered by singing in plastic bags.’

‘Two major themes of the dystopian were thus always in the room: the threat to life from an invisible, incomprehensible danger, and the threat to freedom from state intervention. (…) On another performance evening, Thom Kubli played acoustic cityscapes from Sao Paulo with the wonderful Ensemble Adapter, followed by Chico Mello and Fernanda Farah, who congenially paired the stereotypical imagery of telenovelas with the poetry of the Brazilian poet icon André Sant’Anna. (…)
Mario de Vega’s sound performance ‘El Intruso’ effectively sharpened the basic feeling of the festival on the last evening. In a large part of the exhibition spaces, the actual works were still visible, but: all switched off, dead. Instead, they were now overlaid by other elements. In front of the beguiling color monitor screen of Guiliano Obici’s interactive installation ›Screen Utopia‹, de Vegas’ figure (a frightening Mathilde Invernon) collapsed in flesh and blood; Visitors: embarrassed on the inside, on the outside, then they trudged uncomfortably through the exhibition, which was in the process of dissolution, outside into November.’

‘.. by Caccuri and portrayed by Ha with exaggeration, humour and irony. Instead of simple criticism, the work reflects a hopeless situation in which “meme-isation” and ridicule are the only remedies against the insanity of reality. Bruno Gola’s installation “Bruto” also referred to the political situation in Brazil. The piece put the audience in a state of fear, triggered by searchlights, sounds of protests blaring from suspended mobile phones, wall graffiti and sirens. “Breath” by Hyunju Oh is an installation radio play whose scenographic approach includes not only sound and video, but also sound spots, barricades, neon lights, broken mirrors and doors. This work goes beyond the definition of sound art and immerses the audience in a dystopian parallel world where sound is only one of many layers that make up our perception of space.’ 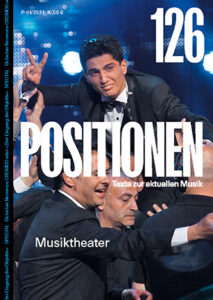 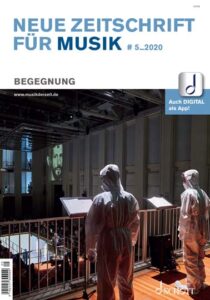 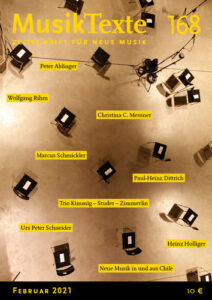